This was my very first gig in Europe!

I’m already excited for August, because I have three cool gigs then.  There’s a private party in New Hampshire (with a quartet that includes two faculty from Berklee), a solo piano concert on an island outside of Boston, and… the biggest and most intense gig of the summer, a four-concert tour of Japan.  I’ll write another blog soon with more details.

But the reason why I wrote this blog is that I just came back from my first ever trip to Europe.  I went to Spain and France, and played at my first ever European jazz festival… Heineken Jazzaldia in San Sebastian, Spain, which is basically a huge jazz party.  It was fun!

This trip was different from most in that my entire family went (my mother, father, sister and I).  Only my mother had been to Europe before.

San Sebastian is a beach city in the Basque region, which means that lots of languages are spoken.  The Basque region is on the border between Spain and France, but the indigenous Basque people have a (very complex) language of their own that predates all other European languages.  So in San Sebastian (or Donostia, which is the city’s Basque name), 99% of the people speak Spanish, about a third speak English, about a third speak Basque, and there’s some French as well because the city is so close to the border!  And this is not even to mention the fact that it’s a popular tourist destination all over the world, which means even more languages.

The flight to San Sebastian (through Paris) was an overnight flight, which was intense; the nights are shorter when you fly east!  And after I arrived at the hotel, I had an interview right afterward with El Diario Vasco (The Basque Diary), the major newspaper there.  So it was great to get a good night’s sleep afterwards.…

Friday, July 20, 2012 was one of the craziest days of my life.  I started by rehearsing with my sidemen (Javier Mayor de la Iglesia on bass, and Hasier Oleaga on drums).  Both of them are incredible musicians; check them out.  After the rehearsal, I had to hurry back to the hotel to do two interviews. All this time, I was speaking a lot of Spanish.  Then I did some sightseeing all afternoon, had dinner, and played the concert.

The concert was at the Coca-Cola Stage, one of the outdoor stages of Heineken Jazzaldia.  There are a total of 13 (yes, 13) stages of many different sizes at Jazzaldia.  The largest stage (on the beach) features famous rock acts and often draws tens of thousands of people for a single concert!  But next to that big stage are three medium-size stages, each of which seats about 500 people.  I played on one of those stages (the Coca-Cola Space) with Javier and Hasier.  It was a huge 90-minute concert, in front of a packed house, with a whole bunch of loud intense songs (including and some new ones).  In short, it was awesomely awesome.

The next day, I played a noontime half-hour solo piano concert at the Club Room of the Victoria Eugenia Theatre.  The concert was for the local autism society, GAUTENA (the wonderful organizer of my trip is from GAUTENA).  There was supposed to be a small crowd, primarily composed of kids with autism (noon is early for a concert, especially in Spain).  But due to heavy promotion, the number of people who showed up was twice the capacity of the room!  So I played two half-hour concerts for two different audiences.

The second concert was also the last concert of the trip, so then I had a couple of days to do the fun stuff.  San Sebastian is a beach town, and there’s not just one beach; there are multiple beaches covering the whole length of the city.  I went swimming in the water, which is nice and cold, as the northern coast of Spain has cool summers.  There are two mountains on the coast (Monte Igueldo and Monte Urgull), both of which are gorgeous and have incredible views at the top.  Igueldo has many fancy houses, a railway to the top, and an amusement park at the top that includes an extremely old roller coaster with no seatbelts (yes, I rode it).  Urgull was used as a fort in the 1800s, and you can climb to the top of the fort (it’s an intense hike).  There’s no development on the mountain, which creates a great contrast.

And next to Urgull is Parte Vieja (Old Part), the best party neighborhood in San Sebastian.  Everyone eats pintxos (Basque tapas) and gelato, with some wine to drink.  There’s a lot of old Spanish architecture.  My family went to Parte Vieja almost every night.  Parte Vieja is also where I saw Ninety Miles (Nicholas Payton, David Sanchez, Stefon Harris), Al Di Meola World Sinfonia, Hasier Oleaga, and the concert “An Evening with Two Pianos” (Kenny Barron, Mulgrew Miller, Eric Reed, and Dado Moroni).  All the Jazzaldia musicians stayed at the same hotel, so I saw many of these amazing musicians in the lobby.

On Sunday the 22nd, we were supposed to go to Bilbao and the famous Guggenheim Museum (designed by Frank Gehry), but the wake-up call didn’t come through and I slept until 2 in the afternoon!  But on Monday the 23rd, my whole family went to Saint-Jean-de-Luz and Biarritz in France.  They are both very beautiful seaside towns, and the food is incredible.  It was very hot, so everyone was on the beach.  And I practiced some French as well, but my mother is the real French expert in the family.  There’s a bit of a culture shock when you go across the border; the signs on the Spanish side are in Spanish and Basque, but walk a block and the signs and architecture are all French!

I flew back to Boston on July 24th and rehearsed on the 25th for my upcoming private NH gig.  It’s nice to have a week or so of downtime, but the second half of the summer has started, and it’s going to be even more intense than the first.

I’ll see you this August in New England and Japan. 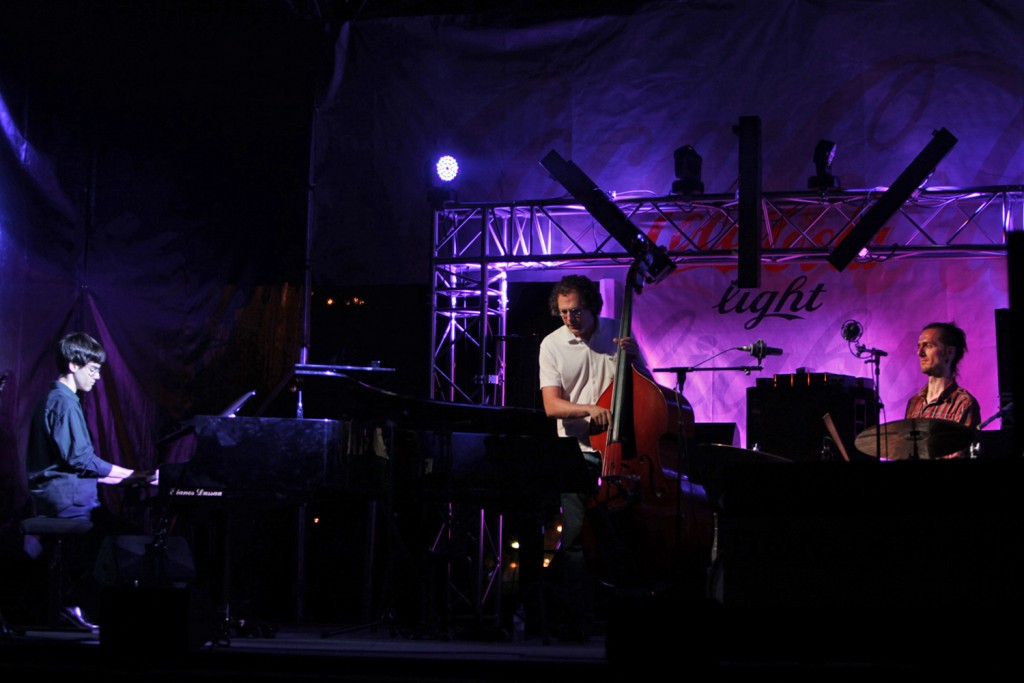